BBMA Band Of The Week #1: Heartfelt

New Categorie: BBMA Band of the Week!
First one is dedicated to my good friends in xHeartfeltx 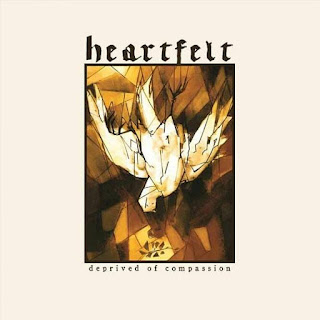 They're a 90's Style Straight Edge Hardcore Band from Belgium
and you should really check them out! I had the honor of re-releasing their demo on tape,
back in May '15 as BBMA11 - but, let them speak for themselves:

How has the band evolved since the beginning?
(Alex) Early 2011 Maarten Scholz (guitarist) wanted to start a melodic hardcore band
in the vein of More Than Life, Killing The Dream etc… he was searching for a drummer,
and placed a message on a forum which I replied to. So I went to try and stayed ever since.
After about two years of practicing, playing shows, and recording an EP, I was fed up
with the things we played. I rather wanted to play some kind of 90’s new school hardcore form,
like Spirit Of Youth or Kindred. As a teenager I grew up listening to those bands so it made
more sense to me. Eventually in late 2013, early 2014 we started to rehearse, making new music
that people reffered to as Culture, Morning Again, Kindred… It was so much more fun to me,
it felt more natural. As a drummer, I learned to play with other people so I already took a huge step forward, and from then on I could actually play something I always dreamed about. In april (or may) 2016 Wouter, a friend of ours, joined as our new bassplayer, which also was a big step forward for us as a band. He quickly learned all of our songs, and we kept playing shows with our new line-up. Also, Dimitri (vocalist) ’s voice sounded so much better than ever before. People started to appreciate us more, they came (or stayed) to actually check us out. Our music kept evolving, becoming heavier with more metal influences. At this point we are in the process of writing new songs again, to record an EP in 2017. The music still gets darker, more bitter. It feels more natural for Maarten Steyls (guitarst) to write songs in this particular style of music. He once told us that the songs on our LP (Deprived Of Compassion) didn’t feel natural to him, the writing process was harder than it is now.
I think that a lot of the things that he plays are way better than what we used to play. For me, I try
to improve my drum rhythms, and patterns, going faster from time to time (i.e. the addition of more double bass pedal drumming). We exist as a band for almost 6 years, and I think that’s not bad at all. It was only this year (2016) that we decided to become a straight edge group. When Wouter joined our ranks, we had a potentially edge line-up, and most of us were already straight for years.
We liked the idea so we just claimed the straight edge for us as a band. It’s a personal choice, we are not the band that only spreads that message through our music. So be sure to keep an eye out in 2017 for our new EP, feel free to check out our (new) music, and to catch us playing at a show.
Or just come and hang out, it’s always fun to meet new people!

(Maarten Steyls) We released our first record ‘Deprived Of Compassion’ back in January (2016).
I’m proud that we made that happen, and I would definitely like to thank Arne from Mosh Potatoes for releasing it on vinyl, and Patrick from Mark My Words Records for doing the CD release.
The most important goal for me would be to do a small tour or weekender sometime.
I feel that’s long overdue. We rarely play outside of Belgium and I think there are other countries
that might appreciate what we do even more.

(Alex) As I said before, some of our goals we accomplished before are the releases we did
(old EP in 2013, the new promo songs -2014-, and our LP in 2016). We are going to record a new EP in 2017, at least that is our plan. For me personally, one of the best things ever was that our band
was being noticed by friends, and other people from 90’s hardcore bands that we love
(Spirit Of Youth / Solid, Kindred / Enemy Of The Sun… some of which play in other bands now – which we played together with - : Lockstitch, From Cocktail To Fire, Kabul Golf Club…). Sometimes when I see someone wearing one of our shirts, that's also a really good feeling.
Also, a weekender or a (short) tour would be nice to accomplish. I think that if we would be an American band, we would get more attention. We once played at a showcase where Blistered (USA) headlined. After the show they talked to us, telling they loved what we do and that if we would be based in America, people would go more crazy over our music. On the other hand, I think that it’s just nice to be a Belgian band, hailing from the country that brought you the finest H8000 Hardcore (Congress, Liar, SOY, Regression, Spineless, Vitality….), Brussel (Arkangel, Length Of Time….), and Antwerp (Facedown) bands, as well as some of the best Limburg hardcore bands ever
(Kindred, Enemy Of The Sun, Ashlar, Distract…).

(Maarten Stelys) We have been writing new songs since May. We are really stoked to play
our new set. It’s still 90’s metalcore, but everything sounds a bit more agressive and darker.
Everyone in this band has improved in what they do. The song writing in this new style feels
more natural to me. We’re also spending more time working on details and we set the bar higher
for ourselves. A lot of riffs end up not being used if we’re not 100% satisfied with how it sounds.
We are currently finishing up the last songs, so we will be heading into the studio soon.
Our plan is to release these songs as a 10” EP, sometime in 2017. So if any labels would like
to help us out with this, let us know! (ever heard of bbma records...?)

(Alex) We plan to record and release a new EP in 2017 (as if you shmucks didn’t read that
before, hah!). For now we only have 1 show planned, a birthday show for a good friend of ours.
We will play some new songs there for the first time. If you are triggered after reading this,
and want us to play at your show, feel free to contact us with your question(s)!
Also feel free to check out the other bands we play in: Titan, No Solace, Devour,
and some new projects that hopefully will see the light of day in 2017, haha.

(Dimitri) The coolest thing about BBMA is Tim. Also the fact that there are so many bands on his label that waive the Flag of the 90's is really cool. BBMA does quite a lot... I think the only thing they could do to improve, is to make more living room-mosh video's to advertise their releases.
I think that's it's Tim's best marketing tool atm and he should take it to a higher level.

(Maarten Steyls) In December of 2014, we played a show in Germany (which was actually our
first show outside of Belgium). After our set, Tim started talking to us and asked if he could
release something for us. We were really surprised by this. I believe that was the first time
we got actual support from a label. As a result, our demo ‘Flaws In Human Nature’
was released on tape by BBMA in 2015. So needless to say we really like what Tim does
and we are still thankful for him helping us out.

(Alex) ) I got to know BBMA way before Tim knew about Heartfelt. I actually can’t remember
how I started to notice the label, I guess through one of his releases (it may have been the
Realm Of Torment demo tape). Tim is a very cool, and nice dude, who does everything possible
(and probably also impossible) for his brainchild. He promotes BBMA through the internet, goes
to shows with his distro, talks to a lot of people to get BBMA noticed…
and those are just the things he sucks at! You have no idea what he is capable if he would do it
the right way!... Haha no man just kidding. I feel he does everything for the love of hardcore.
Keep it up dude! What could be better in the future? Well, if Tim keeps doing his thing the way he does, things will automatically get even better, that’s for sure! P.S.: it would be awesome if BBMA would sell some bicycles one day, boy oh boy would I be all over that (godverdomme fietsers)!