Okey, actually I don't felt the urge to do a blogspot post about this band...
certainly not because I'd have any problem with them or they werent awesome enough,
fucking go to hell if you think different - this is legendary!
But because everyone already knows enough about them and all their stuff
(which unfortunatley isnt that much) is already widely available.
Nevertheless someone just told me that he's desperately looking
for "320kbps" rips of their stuff... duh, I never paid much attention to that shit,
but hey, who am I to refuse the request of someone I barely know? :P
(and yeah, it actually sounds better than 128kbps or even less!)
...but for the "real" sound, you'd better invest some money and get your hands on a vinyl copy!
at least the Hardline 7" should be available from some discogs/ebay sellouts.
(and it comes with awesome hardline inlet's/flyers)

So, anyway, just search google for some detailed information...
There is even a wikipedia entry!

Members were formerly (and meanwhile) active in Naturecore, Amenity and House Of Suffering.
During their hiatus (after '92) some of them formed the reggae band Captive Nation Rising
and later another straight edge hardcore band under the name Pressure.
Andrew Hurley (who played drums on their last EP, Jihad) is the only member
who constantly has been in lots of other bands I guess, and still is! To name just a few:
Killtheslavemaster, Racetraitor, Project Rocket, Arma Angelus, The Kill Pill,
Fall Out Boy, Burning Empires, Enabler, The Damned Things, Focused Minds, ... 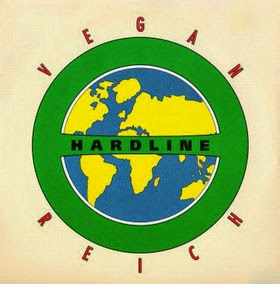