BBMA Band Of The Week #3: xLAIRx 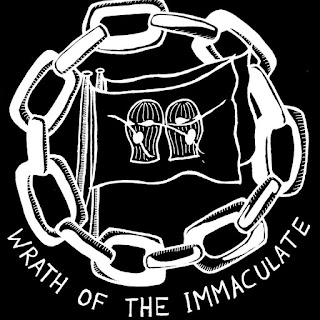 Vegan Straight Edge 90's Style Metalcore from Melbourne, Australia.
One of my favorite recent bands playing that Style. I had the honor of releasing this
on a vinyl 7" as BBMA16 in 2015 - which is now already sold out though.
Also the band itself is now (more or less) defunct,
but there are constant rumors about a re-union - read for yourself!
FFO: The Path Of Resistance, Shockwave, Culture, Earth Crisis, ...
Death To Betrayers. XVX.
Who are you, what are you doing in the band?

I’m Robert and I am one of the two vocalists of XLAIRX,
I’m joined by Michael, War, Pestilence, Famine and Death.
How has the band evolved since the beginning?
What have you accomplished so far and what are your goals for the future?
This band started as a small project but spawned to gain more members to preach
our version of the Vegan Straight Edge jihad, the war of all that is good against all that is evil.
We hope to inspire a new generation of warriors to take up arms and rebel against the stupidity
and futility of modern mankind. So far we have put out our debut 7’’/tape Wrath Of The Immaculate through life.life.regret. records (AUS), BBMA (GER), Cause And Effect (ENG), Cold Hand (USA) and Diorama (INDO). We have been overwhelmed with the support we have had from near and afar, it’s been fantastic to see others involved in the fight for human, animal and earth liberation.
Any upcoming shows/releases/anything else you wanna tell us about?
At this point we plan to record new songs this year but with members around the planet
attempting to defend mother gaia this has slowed the process down.
How do you feel about bbma as a label?
In what do we suck most/what could we do better in the future?
We feel at home on BBMA amongst some of the most straight forward revolutionary music
waging war with the true message of change, the vegan straight edge. Thanks a lot!
Feel free to add some shoutouts:

Thank you to everyone who has supported us, listen to Rebirth and Denial.
https://boundxbyxmodernxage.bandcamp.com/album/wrath-of-the-immaculate
Ps: For this Week, all products xLAIRx related are on Sale from the BBMA Webstore.
16/Jan/2017 http://bbmarecords.com/shop/ 22/Jan/2017
Eingestellt von xRULEx um 04:51