BBMA Band Of The Week #4: Titan 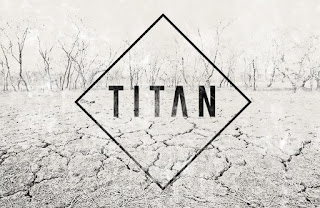 Chaotic early 00's Style Metalcore/Crymosh (...Skramz?) from Belgium.
Members of xHeartfeltx and Serenity Fails. They self-released a Demo in late 2014
and in early 2016 I had the honor of releasing their Split 7" w/ Witness The Fall as BBMA23.
FFO: Jane., Shai Hulud, Converge, Kindred, …

I'm Dimitri Derwael and I play guitars in Titan.

Somewhere in the fall of 2013, Wim (drummer) asked me if I wanted to do a 1-time-gig-band-project together with Hans (Guitars) from ex- Once...Never again. The intention was to play a few 90's heartcore songs (Poison the Well, SkyCameFalling, Once Never Again and we wrote 1 own song)
for a birthday of a (now common) friend. Hans played guitar, I played bass and did backing vocals, Wim played drums and Jim took on the Lead vocals. After that 1 gig we decided to stay rehearsing and write some songs (maybe play some shows - who knows?). Being a guitarist I wouldn't trade
that place so we found Kevin who is now playing bass. Our initial intention was to play a mixture
of old Poison The Well (Distance make the heart grow fonder...era) with Skycamefalling and in a way we still do...but we all have very diverse taste in music so yes, you'll hear those 90's influences
but along with some black metal riffs here and there, some screamo/Skram atmosphere and some
Post Rock/Hardcore ambience. As long as it has that sound of melancholy, despair and rawness,
we're open to any influence ;)

We all have demanding jobs and/or a children so it's difficult to set goals because we all have other/higher priorities. But in the mids of all that turmoil of family/work life, we managed to release
a demo (2 songs - self released) in 2015 and in 2016 we recorded a split 7" released by BBMA together with #crymosh heroes "Witness The Fall". The last one also got released on
Mark My Words Records by Patrick Klosinkski in the UK. Both BBMA and MMW are sending stuff to Japan and those people seem to be crazy about what we do. We never really expected that!
Our future goals are to hopefully do a mini tour, but certainly hit the studio very soon again. We've got enough songs to fill another 7" on both sides (or do a split 10"/12"?? -
get in touch if you're intersted?!)

Our last release was a colaboration between BBMA and Witness The Fall and that proces was just
so amazing. WTF and Titan were in the same studio on the same weekend and we did backing vocals for each other - mixing and mastering was done by the same engineer in such a way to make
it sound like a whole and it turned out just like that! Aron and I designed the artwork, I did the digitalisation and lay-out and Aron did the massive amount of screen printing DIY (!!). That release isn't just about good it sounds and how satisfied I am with the end result - sound and artwork-wise. For me this was also something I will look back at with nostalgia because I don't think that such
a close collaboration will ever be possible again. It was and still is, truly heart warming :).

How can you give any negative feedback on a guy who does all this? The question should not be what BBMA could do beter/more as a label but rather "what should/could we do for Tim to support BBMA and all the wonderfull work he is allready doing?". If you're reading this: Please go to
the webstore and buy something. Titan stuff is on sale in the same week this interview gets online - but other stuff is great as well. Check out First Fight Down, Forward To Eden, Heartfelt, Castigator, Renounced, Sentenced To Burn, Not Dead Yet, Witness The Fall (of course!),;..So get out your wallet and spend that cash so Tim can continue to grow as a label and continue to support those
90's oriented bands with a sincere message that so many HC-bands lack nowadays.
[thanks a lot - do as this wise man says ^_^]