BBMA Band Of The Week #5: No End In Sight

No End In Sight 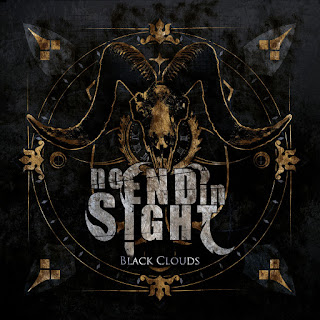 Vegan (lyirc- & ethicwise) Metalcore/Thrash-Metal with a punky DIY attitude.
By Members of Minus Youth, Pessimistic Lines, Lion City, …
No End In Sight were founded in 2004, but have underwent some line-up and style changes
since then. Their first full-length was released in 2008 and their second in 2012. Then, in 2015
I had the honor of co-releasing their third full-length "Black Clouds" on a Tape, as BBMA09.
FFO: At The Gates, Iron Maiden, Arch Enemy, Motorhead, …

Hi, my Name is Kevin and I defend the Guitar Hero highscores in No End In Sight.
I joined the game in 2011 as a result of periodic line-up changes in the band’s history. Lucky me.

Our sound has changed pretty much from the first steps in 2004 until today.
Starting as a teenage-Hardcore/Punk tryout, we more and more focused on solid Metal styles
and found ourselves most comfortable with fast forward, thrashing riffs with enough groove
for all the headbangers out there. After several sampler features and 3 full-length albums,
including “Black Clouds” as the latest release in 2015, we’re now about to fire up a Split 7”
in February 2017 together with Berlin Hardcore Beast SEEK NOTHING out on BBMA.
This is gonna be 10 minutes of sheer heaviness, no excuses.

We’re planning some shows with SEEK NOTHING in April and May in order to promote our Split
and be on the road for a good time. Playing live has always been the most important thing for us
as a band. We don’t want to write songs for the rehearsal room. Driving long distances for
small shows and little money is all we need. But we’re also writing new material constantly.
Due to the slow progress that is typical for us, I can’t tell when the next release is gonna happen.
For now, we’re just curious about the Split 7”.

How do you feel about BBMA as a label?
In what do we suck most/what could we do better in the future?

BBMA already released our “Black Clouds” album on tape as a donation for Animal Equality Germany, which has been a great success. At our first meeting with Tim, we had an extra funny time with trash horror movies and a lot more trash talk. Thanks again for sharing your flat with us!
He was instantly up for our request to release the NEIS/SN Split on BBMA and puts a lot of time
and effort in his label/booking/music activities. We’re happy about the cooperation and surely our paths will cross again. For a future advice of what you can do better: drain your zero % beer down'
the sink and tune up your fridge with the real hop juice! Love Metal, Hate Fascism.