BBMA Band Of The Week #6: Forward To Eden 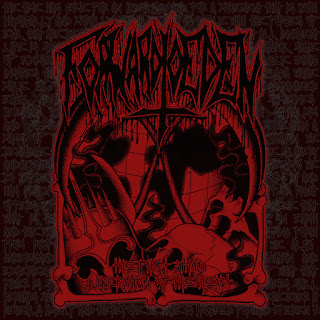 I'm Tim a.k.a. xRULEx and basically I am Forward To Eden.
In FTE's first Incarnation (2014-2015) I did Vocals, Guitars & Bass.
In FTE's current Incarnation (2016-2017) I am doing Vocals & Guitars.
Besides that I am also singing in Castigator (Death/Thrash Metal Band)
and Through Chaos & Solitude (Melodic Black Metal Solo-Project) right now.

I kinda started this band/project (wrote the first songs for it) in late 2012/early 2013.
After I realized that I wont find people to bring it on stage with, I decided to do it as a solo project and recorded a first promo track with my good friend Rat (the man behind Statement).
Unfortunately he didn't had the time to record a whole demo with me and so it took some more time
until the first "demo" was released. This time with "The Vegan Warrior" on Drums.
Then, in late 2016 I had my first great achivement with my first Vinyl 7" release
and shortly after a CD release on another label than my own!
For this year, there is a lot more planed as well - the next Split 7" is already in the making
and there are also some possible line ups for a soon-to-be show in discussion - be prepared!

Shows? We'll see - I won't stand in the way of that.
Releases? Hopefully a lot! Probably some. Definitely at least 2 this year.

How do you feel about BBMA as a label?
In what do we suck most/what could we do better in the future?

Actually, I'd love to release on any other label(s) as well - so, feel free to get at me!
In what I do suck most? Probably in trying to do too much at once... like working a full time job,
doing the label, 2 solo-projects, a band and still managing private life (girlfriend, family, friends)
and hobbies (the gym, reading comics/mangas, watching series/movies, etc.) - I think I could be
a lot more productive if I'd cut out 2 or 3 of them... but yeah, I don't think that that will happen.
So... for now you'll have to live with that - but feel free to do your share and contribute in
listening to my output (https://boundxbyxmodernxage.bandcamp.com), spreading the word about it
and last but not least placing an order from the BBMA Webstore, so that I can continue. Thanks.

...and if you still want to know a little bit more about Forward To Eden and my motives,
check out this interview I was given a couple weeks ago:
http://cialkoxzieleni.blogspot.de/2017/01/en-tim-rule-forward-to-eden-castigator.html
Eingestellt von xRULEx um 11:56