BBMA Band Of The Week #8: Absorption 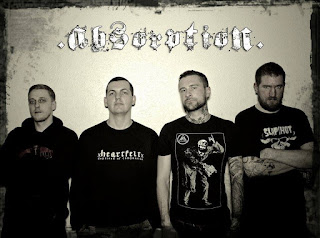 Yooo. It`s Patrick here. I’m trying to play on guitar(s) in Absorption. Alex is doing vocals
and Don drums. We have lost some band members recently. So for now it’s only 3 of us.

Ohh well. When we started with this band (me and Don) we didn’t expect that we
gonna record something so fast. Supposed to be a fun band for weekends only.
Just few friends enjoying playing in band and making some cool noise together so we are very
happy that we did release our debut EP on CD (Mark MY Words records) and Tapes
(BBMA and Coercion Cassettes ). We have learned a lot during that process and we are ready
for more now. Maybe we are not active that much (band members problems, work, family)
but we are working on new stuff and this is the main thing I think.

Recorded demo – done. Release this – done. Write some new music – working on this.
Release something new – working on this. Few slightly further bands goals – play more shows
especially one in H8000 area, one in Japan and one in your bedroom.
After these 3 shows I think we can say it’s over for us.

Yes. At the moment we are looking for solid band members (guitar and bass) so we can start
thinking about shows etc. We are working on few songs which we wanna release on split
r next ep. We are talking to some bands about this so we will see what future will bring.

Damn this is the moment where I have to lie again – yeah BBMA is cool, we like them,
nice people etc. It’s good to work with them ;-) But to be serious – BBMA is doing very well
I have to say. In short time people started recognizing your name. That’s good. Keep that hard work. Hope that we can work together again in the future as a band and as a label.

Thx for giving as a chance to say few words!! To everyone else – support DIY,
support your local scene, support small bands and labels. Fuck the hype.
Listen to Slayer, play Fifa and remember – there is no god!! Fuck!