BBMA Band Of The Week #9: No Restraint 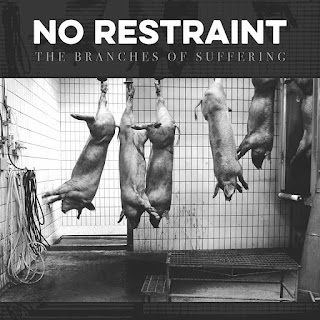 Metallic Vegan Straight Edge 90's Style Hardcore from Florida.
A militant stance towards veganism & animal rights ...and some serious chugg!
I had the honor of co-re-releasing their demo, which already was one of my favorites from '15
on a 7" (as BBMA21) in early '16, together with Bitter Melody Records (USA).
FFO: Green Rage, Trial, Earth Crisis, ...

I'd say our influences have gotten a bit broader. When we first started I just wanted us
to sound like a mix of Indecision and Snapcase, but that's not the case anymore.
Our lives have changed a bit as well, so practicing, writing and playing shows
doesn't happen nearly as much as we'd like.

I never had concrete goals for the band. I wanted to play music with my friends
and use it as an outlet to talk about veganism. Hearing from multiple people that our band
was the catalyst that made them go vegan is all I could have ever hoped for.
Releasing two 7" records and having people from other countries show interest in us
is something that I still wouldn't have predicted.

As I said earlier, we don't practice as much as we'd like.
Hopefully we'll play a show sooner rather than later.
We have a couple of songs we'd like to record, so hopefully that will happen as well.

BBMA is great. I definitely won't tell you how to do your job!