BBMA Band Of The Week #10: Realm Of Torment 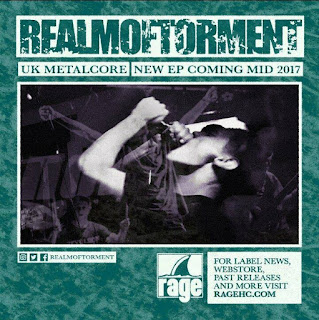 Early 00's Style Metalcore/Beatdown Hardcore Band from the UK (UYC Crew).
I had the honour of co-releasing their LP (and a promo tape before that) on vinyl.
FFO: Slavearc, Martyr AD, Killswitch Engage, ...

Who are you, what are you doing in the band?
My name is Jonny & I play guitar.

How has the band evolved since the beginning?
When we started we had a more 90's sound I think. It is still there in doses,
but we have naturally moulded into a more early 00's metalcore sound along
the lines of Parkway Drive / It Dies Today etc. I think this has come about due to
simply getting better at our instruments & being able to write closer to exactly what it is
we want, as well improving our actual sound live & on recording.

What have you accomplished so far and what are your goals for the future?
We have been a band about 3 & a half years. So far we have put out a 4 track demo,
an 11 track album & we are to begin recording for a 3 track EP this weekend.
We are already looking to the future & discussing how we would like a follow up album to sound.
We have toured the UK a few times / played tons of one-off shows & visited Europe for a couple
short weekends so far, however we are currently in the middle of booking an 8 day European tour
for summer. Our next aim is to head to Spain for some shows following that seperatley.

I guess I just answered this mostly above, but I can talk about the new release. It sounds not
dissimilar to the album, but song & riff writing has vastly improved, the songs flow a lot better than
before. We also have a few softer parts on this, as it's only a short release we thought we would
experiment & try some newer things out. I say it's short, but even though it's 3 songs it will be around
12 minutes in length. The best song we have wrote so far / will ever write is on this too.

How do you feel about bbma as a label?

BBMA is a great label & always put 100% effort into everything you do, you always know
if you're working together on something you guys will do it with the up-most attention.

In what do we suck most/what could we do better in the future?

The best thing about the label for me is the small details that go into the releases.
Like a lot of the releases have a ton of information about the bands which is cool to learn
things about them & see maybe why they are how they are. I'd say it could improve at
merch designs for my personal taste, I want a balaclava for when it's snowing but I also
don't want peopel to think i'm going to burn down a church.

Shoutouts to The UYC, metalcore is the air that i breathe.