BBMA Band Of The Week #7: Vatican 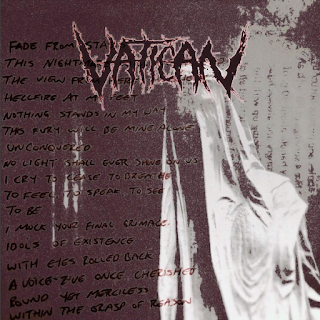 90's Style Metalcore/Crymosh Band from Savannah (GA).
(Ex-)Members of Coastlines playing music in the vein of Bands like:
Poison The Well, Zao, Prayer For Cleansing, ...
I had the honour of releaisng their debut EP "Drowning The Apathy Inside" as BBMA15.

I’m Jonathan Whittle and I sing for Vatican.

Since January 2015, we started off as a 4-piece, all from Savannah, Georgia.
We’ve written an EP called “Drowning The Apathy Inside” which was released on April 20th.
Around the time of summer was our first tour with a band called Without, also from Savannah,
and we headed out to Texas and back. We also picked up a new bassist, Jonathan Mackey,
which at the time was newly living in central Florida, originally from Long Island.
December 2015, we went on our second tour with Bind from Florida, and headed
up the east coast. January 2016, our close friend from Atlanta, Tom Lovejoy joined the band,
then went on various short runs with bands like Sanction, Jukai, Detriment, and Heavens Die.
In March, we went on a tour to California and back with Down In It (NC).
Future wise, we’d like to eventually do another US run and hopefully hit Europe and/or Japan.

We’ll be doing another east coast tour from February 22nd to March 6th with Heavens Die.
As a full 5-piece, we’ve finished writing a full length, which will temporarily be titled
“Ache of Eternity”. We recently just put out a 4-way split with our friends in Sanction (LIHC), Funerals (Portland), and Iron Curtain (Inland Empire, CA) thanks to Bitter Melody Records.
The split is now streaming on our bandcamp, and a preorder link is currently up on the page,
for those wanting a physical 12”. [http://bittermelodyrecords.limitedrun.com]

I’ve always thought BBMA was a very pro, great label.
There’s not much I can pick on, with a label that’s always supported us beyond what we hoped.
Just keep being consistent and pushing hard ass bands. Thanks a lot!