BBMA Band Of The Week #13: Not In This Lifetime 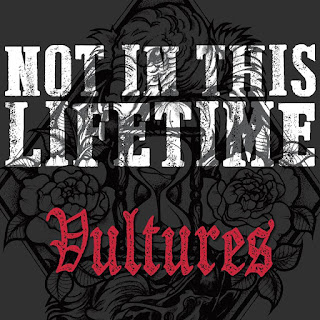 Melodic, yet metallic oldschool hardcore from the Netherlands (by ex-members of Lies!)
After the well accepted release of their demo I now also had the opportunity to release their
debut full-length on tape as well. If you didn't had the chance yet, be sure to check it out now!
FFO: No Turning Back, Champion, Casey Jones (without the SxE), Death Before Dishonor, …

Hi my name is Sander and I do vocals.
Besides that I write all the music for NITL, so the band is kind of my baby.

Since the beginning we added 2 friends on guitar and I switched from guitar to vocals.
Musically the direction was pretty clear from the beginning, but NITL will never write the
same album twice. So there will always be certain aspects that make NITL sound like NITL.
But at the same time things do evolve. I think our demo already showed that there’s a lot of
diversity between and within songs. On our debut album “Vultures” I think we showed
a wide variety of influences and tried to make this come together and fit.
The goal for a next release is to really create more of a signature sound/style.

What have you accomplished and what are your goals for the future?

We released a full length album last year and played a couple of really cool show,
in Holland but also abroad. More people start to know we exist. We all have jobs,
have a mortgage and some of us have kids. So we’re not in the position to put as much time into
the band as we would like. But with the time we have we try to accomplish as much as possible.
My personal goals for the future are:
-have fun with my friends (absolute number one)
-create and play music that makes my heart beat faster
-play cool shows

We play our hometown Groningen next week [this is a bit outdated - I'm afraid - my fault] and got some other things going. I’m busy writing new songs and we started
rehearsing a few of them. I’m really exited about the new stuff and hope that we can
start recording asap, hopefully somewhere in 2017.

I have a lot of respect for people who put their time, energy and money into supporting
bands they enjoy. I like bbma’s enthousiasme and how easy Tim is approachable.
Communication has always been easy and every promise is kept, so that’s really cool.
What I personally don’t understand is why a lot of smaller DIY labels do so many
releases every year, in stead of doing a few and promoting the hell out of them.
But I guess having a bigger catalogue is also a cool achievement
and being able to support more bands you love counts for something.
[The main reason why I release "so many" things each year is, that I always feel bad
when I have to decline a submission (of which I actually like)... and so I just do it :P]

Thank you Tim for your support.
If you checked out ‘Vultures’” thank you!!!
If you don’t know us check the links below.
www.facebook.com/nitlifetime
nitlifetime.bandcamp.com

Ps: For this Week, all products Not In This Lifetime related are on Sale from the BBMA Webstore.
17/April/2017 http://bbmarecords.com/shop 23/April/2017
Eingestellt von xRULEx um 05:21