The perfect answer to the question "hey man, can you recommend me some cool new music?"
finally is here! Just give him a copy of this awesome mixtape with all your favorite bands on it!
There will be a first run of 100 tapes (up for pre-order over here: http://bbmarecords.com)
and besides that you can also stream/download the whole thing over here for free:
https://boundxbyxmodernxage.bandcamp.com/album/the-bbma-records-mixtape
(You will have all file-formats available for dl, so you can also make your own tape/cd/whatever) 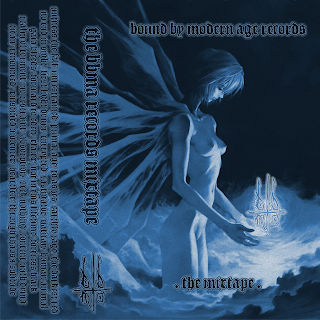 Witness The Fall - Palm Diggers
WTF (NL) were the first Band on BBMA and have since then became good friends of mine.
They have been around for quite a while but are still going strong
and in contradiction to most other bands are also even getting better!
Members are also active in bands like: First Fight Down, Drain-Life, The Darkest Red, …
This song is from their '16 Split 7" Release. Good old melodic 90’s style metalcore.
FFO: Skycamefalling, Poison The Well, Morning Again, ...

Unrestrained - Ethel Mertz
Unrestrained (OR)'s '14 LP was the 2nd release on BBMA and also the first international
straight edge release, what made me especially happy. You might know their members
from bands like: Never Enough, Pulling Teeth, Ten Yard Fight, Backlash, The Dead Unknown, …
This band was formed in 2007 and since then delivers metallic 90’s style Straight Edge Hardcore.
This is song is from said LP. FFO: Unbroken, Undertow, Strain, …

To Ashes - The Holocaust Has Never Ended
To Ashes' '14 EP "Liberation Through Destruction" was the first BBMA vinyl release
and therefore definitely sets a milestone in the label history. The band (now defunct)
came from Italy and played metallic vegan straight edge 90's style hardcore in the vein of
bands like: Purification, Green Rage, Gather…. Your soundtrack to de-mosh the state!

Earthly Rage - World Justice
Another band that unfortunately disbaned soon after their only Demo ('14)...
90’s style hardcore/metalcore from the UK. FFO: Morning Again, Chokehold, Unbroken, …
Some members went on to start a new band, but that kinda fizzled out as well (afaik).
The Darkest Red - The Cyborg Condition
Technical Death Metal from the Netherlands, by members of bands like: Witness The Fall,
First Fight Down, Blind Sight, Sengaia, Second Dawn, Fenris, … I did a special Tape Release
of their latest album ('15) for their last show (which this song is also from).
FFO: Gojira, The Dillinger Escape Plan, Nile, …

No End In Sight - The Hourglass
Vegan (lyirc- & ethicwise) Metalcore/Thrash-Metal band from Germany with a punky DIY attitude.
(Members of Minus Youth, Pessimistic Lines, Lion City, …) Their '15 LP was my first tape release
of which I donated 100% of the proceeds to an animal rights cause, what made me especially happy.
This song is from their most recent ('17) Split 7". FFO: At The Gates, Iron Maiden, Motorhead, …
First Fight Down - Condemned To Suffer
First Fight Down (NL) was founded in 1997 and were active until around ’08/’09.
In '15 they got back together (with members of Witness The Fall and The Darkest Red)
and now (early '17) finally released a killer of an 12" EP (which this song is taken from).
FFO: Morning Again, Reprisal, From The Dying Sky, …
Encrypted - Into The Abyss
Oldschool (Death)Metal arisen from the ashes of Crucial Times (BEL).
Unfortunately already disbanded after only one album (in '15) as well.FFO: Obituary, All Out War & the death of false metal!!!
Castigator - Opus Magnum
Death/Thrash Metal Outfit from Hamburg, Germany which I sing for.
Members of: Forward To Eden, Through Chaos & Solitude, ...
The song has been taken from their '16 EP entitled "The Recommencement".
FFO: Death, Gojira, Slayer, Exodus, etc. ….
Vatican - Shiver
Ex-Coastlines (GA) playing 90’s style metalcore/crymosh in the vein of bands like:
Poison The Well, Zao, Prayer For Cleansing, … This song has been taken from their
'15 debut EP (which was - since now - the only release on BBMA)... I really recommend
checking out their new stuff as well though - they only keep getting better!
Human Animal - Down We Go Again
Kind of an hardcore allstars-super-group with members of bands like:Anchor, Jesus Wept, xDisciplex AD, Brother’s Keeper, Prayer For A Fallen Angel, The A.K.A.s, Empty Promises, Smoke & Mirrors, Abnegation, Run Devil Run, Phases, …
This song is the only "exclusive" track on the compilation tape I did for them in early '16
FFO: Sick Of It All, xDisciplex AD, Madball & anything else Lake Erie Area Hardcore.
Gaia Bleeds - Stuck
Vegan straight edge 90’s style beatdown/metalcore from Bru-lsland (a.k.a. UK).
FFO: Withdrawn, Slavearc, xCanaanx, … only did one demo in '15 and then called it quits.
(Fun fact: I had the honour of being their singer during their last tour)
Forward To Eden - Fight For A New World
Vegan straight edge (hardline) 90's style metalcore one-man project from Germany (my own band).
This song has been taken from their '15 Demo CD (Re-mixed version from the '16 comp).
FFO: Statement, Culture, Unborn & The Vegan Jihad!
xLAIRx - Gaia’s Retribution
Vegan straight edge 90’s style hardcore (from Australia) in the vein of bands like:
Path Of Resistance, Earth Crisis, Shockwave, Culture, … Still one of my favorites.
This song is from their 7" vinyl co-release with Life.Lair.Regret. Records.
Not In This Lifetime - All We Have Left
Melodic oldschool hardcore from the Netherlands (by ex-members of Lies!).
FFO: No Turning Back, Champion, Casey Jones (without the SxE), Death Before Dishonor, …
This song is from their new ('17) album which I had the honour of releasing on tape.
Fortress Black - Endzeit
Post-modern black metal/blackened negative dark hardcore from Germany.
FFO: Dunkelheit, Naturgewalt & Total Death! With members of bands like: Beatdown,
Radical Development, 711 Mayhem, Leichnam, Empowerment, True Blue, Iron Skull,
Golgatha, Son Goku, Line-Up, The Crimson Divine, Absidia, Countless, …

Realm Of Torment - Anathema
First BBMA 12″ Vinyl Release (in cooperation w/ Rage) and still one of my favorite current bands.
Early 00’s style metalcore/beatdown from the UK (UYC Crew) FFO: Killswitch Engage,
Martyr AD, Slavearc, … with members of bands like: Nihility, Overturn, No Excuse, …
No Restraint - The Branches Of Suffering
Metallic vegan straight edge 90’s style hardcore from Florida with a militant stance towards
veganism & animal rights. FFO: Green Rage, Trial, Earth Crisis, Culture, …
I had the honour of co-releasing their demo on vinyl in early '16.

Absorption - Stranger
Metallic 90’s style hardcore band from the UK (with the guy behind MMW on Bass).
I had the honour of doing the tape version for their debut EP.
Their song is a re-recorded version of one of their demo songs.
FFO: Pain Runs Deep, Sunrise, Arkangel, ...

Seek Nothing - Whale Thrower
Metallic oldschool hardcore from Berlin. FFO: "not so bad" hardcore...
This song is taken from their '17 Split 7" w/ No End In Sight.
Content With Dying - Justice
Short-lived project band by members of Fourth Crusade.
Oldschool vegan metal FFO; Day Of Suffering, Chokehold, Integrity, ...
This song has been taken from their '16 Split 7" w/ FTE (which is also their only demo though)

Renounced - Love And Depression
Early 00’s melodic, emotional metalcore from the UK (with breakdowns)… a.k.a. “Crymosh” Members of Abolition, Digress, Employed To Serve, and probably a couple more!
FFO: Poison The Well, 7 Angels 7 Plagues, Hopesfall, …
This song has been taken from their '16 Split 7"w/ STB,
xJustified Violencex - The Pledge
“Real Hardcore For True Straight Edge Warriors”
Militant oldschool sxe hardcore from Maryland,  FFO: xWidowmakerx, Casey Jones,
Minority Unit, Path Of Resistance, xBishopx, ... This song is from their latest ('16) album.
xHeartfeltx - Enslaved
Metallic 90’s style straight edge hardcore by members of bands like: Serenity Fails, Titan,
xDevourx, No Solace, … FFO: Kindred, Morning Again, Spirit Of Youth, …
This song has been taken from their latest ('16) album released through Mosh Potatoes.
Yeah, unfortunately I wasn't involved in this, but I released their demo on tape (in '15)
and will definitely try to be a part of their next output as well!

Through Chaos & Solitude - If This Is The Best We Can Get Then I Am Disappointed
New melodic black metal one-man project from Germany (by myself).
Members of FTE & Castigator. FFO: Woods Of Ypres, Agalloch, Panopticon, …
This song has been taken from their demo/debut ('17) EP which is just out.

So, if you managed to read all of this until down here: Congratulations!
Feel free to re-post/tell a friend/whatever - I'm sure there is some music in this for everyone.
Oh, and if you like the cover-theme - you can now also get a new BBMA t-shirt design
along with your tape pre-order, check it out: http://bbmarecords.com/shop 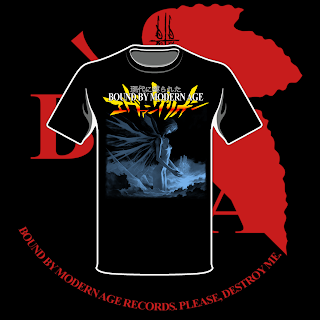 Thanks for your attention. Keep up the good fight. Support diy bands and labels. Go to small shows.
Bring back the 90's. Go vegan. Strife for total liberation. ...and watch more anime.
Eingestellt von xRULEx um 10:27