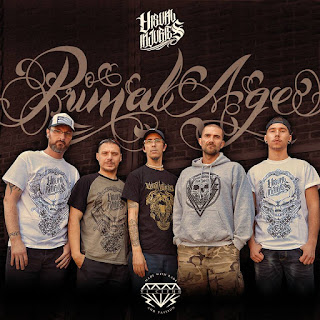 Primal Age is OG Vegan Straight Edge 90’s Metalcore from France.
The band was founded in 1995 (released their first Album in '97), became Absone in 1999,
just to became Primal Age again in 2006 and remains active under that name until today.
...still vegan, still straight edge, still shredding that 90’s Metal(core) sound.
One of my first releases (3 years ago), was the (now sold out) compilation/best of tape
"My Legacy / Eternal Struggle - The Best Of 17 Years XVX 90's Metalcore" which held
some of their (to my mind) best tracks from the very begining to where they where then...
And now, in 2017 I just had the honor to work with them again and do the vinyl version
of their most recent EP "A Silent Wound" (which you can now - only for one week -
get on discount from the BBMA webstore). Check them out!
FFO: Arkangel, Earth Crisis, Heaven Shall Burn, …

Who are you, what are you doing in the band?
I'm xDimitrix, I play bass, do some backing vocals and also write the lyrics for PxA.

I think we've succeeded in keeping the identity of our sound without doing the same
records always and always again. We started 22 years ago with the energy and fury of a
young edge metal band, and it's still the same passion and hapiness to have the opportunity
to keep this adventure alive. We feel proud to stay after all these years.

PxA has 2 full albums, 1 split album with the japanese band Cherish and the argentinian guys
of xMostomaltax. 2 EP's, 12 crossed countrys with a mexican tour, one in Japan and one in Brasil, more than 300 shows. We're still hungry and want to see more, meeting great people with
different cultures and playing the music we deeply feel. Our favorite topics are the same since
the beginning: the defense of Earth and all the living creatures you find on it.

Any upcoming shows/releases/anything else you wanna tell us about?
Our latest EP called "A Silent Wound" is just out, so we'll keep our time before doing another
(as we've always done). We plan shows to defend it, maybe far from home to keep that at memory
for our old days. Your label BBMA offers us a vinyl version and the indonesian label
Diorama Records another one on tape (out soon).

How do you feel about bbma as a label?

We've the chance of making a vinyl version because of you, so...
Thank you Tim for your assistance and the support in this project.
We wish you all the success in what you do.

In what do we suck most/what could we do better in the future?

Experience is the key, we all do some mistakes, the most important thing is to learn from
these shity things to get better. Less dispersal to keep your energy focused on one goal at the time. Work according to your ways and means, passion will make the rest.