BBMA Band Of The Week #16: Seek Nothing 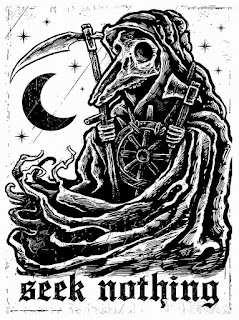 "Not so bad hardcore" since '14.
DIY metallic oldschool hardcore from Berlin. Their Members are a motley bunch from all around
the globe, with just as different roots though. FFO: Metal, Hardcore & everything inbetween.
I had the honour of releasing their S/T EP on Tape in mid '16 and also
their Split 7" w/ No End In Sight in early '17. I highly recommend both ;-)

Hello, my name is Mike and I am the screamer/dancer.

We pride ourselves on not really getting better to be honest,
most bands that evolve just end up playing EDM and fighting online with their fans.
I would definitely say that we are better at what we do, live and in recording. Yes.
I think I mentioned this before but one of my favourite things about being in this band is
the learning curve. I now know more about writing, recording and distributing music
than I did three years ago. We’re still totally clueless but I like embracing the fact that
we (I) are a spectacular mess 98% of the time.

We have accomplished not killing each other
and our main goal is to not die before we record an actual album!

Yes we are finally finishing our second EP at the moment, which will be four br00tal songs
about the usual pathetic subjects that piss me off. Mark My Words Records are going
to put out the CD this summer and then we would like to release it on 7” later this year.
We have been playing some of the songs for over a year now so it will be nice to finally
have them released. They are all basically the same as our other songs except that
when it’s heavy it is HEAVY and the melodic stuff is more, well… melodic? Yes.
I guess we should really write a full length record while we have some spare time coming up
until the Autumn. We are currently booking a tour in October with our pals in Bomb Out,
if any of us lives through that it will be a small miracle.

I have very strong feelings about BBMA in general! Tim is such a wicked dude
and has treated us super well since we were first introduced by a mutual friend.
We’re not straight edge (but love tons of bands that are) so that’s extra nice that we were welcomed
to the label. It proves that there is still some inclusivity within the hardcore scene.
Being in a DIY band can be a struggle so having that support has really helped us.
Also, please reference Neon Genesis Evangelion more.

No thank YOU!
Shoutout to Piece, Earn Your Scars, Employed To Serve, Murder Mile, Head To Head & Kiss!