The first actual blogspot post (in terms of dl some obscure 90's shit) in years I guess, but:
After years of searching I finally got my hands on this here - my holy grail
in form of a 90's metalcore music release (even in physical form) 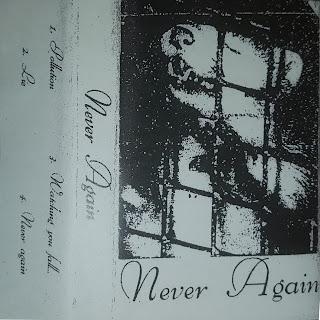 For those who don't know me: Caliban is THE band that got me into listening to heavier music
at the age of 12/13, it was my first metal concert and still remains one of my all-time favorite bands.
After I heard of this record for the first time, I kind of turned the whole internet upside down
in the search for this record - unfortunately I never found it.
I wrote the bandmembers directly and all the old people that have been around back then
(unfortunately I was only 6 yo in '97) but none of them seemed to have a copy of that tape
and never seemed anyone to have digitalized it...
However, now I finally got my hands on a copy (through the Preserving Silence Distro - I highly recommend checking it out in case you're looking for some old obscure stuff) and did it myself :-)

So, I was still curious what the band members remember from that time and if they could
perhaps give us some more intel... see for yourself (short-interview with Marc Görtz):

1997 - been a while - anything particular you remember from that time, you wanna tell us about?

Good question, but we had the band for a bit already, just renamed it at this point... but besides that
I don't recall much from that particular time. We just started playing pretty many shows.

So, lets start with the details (as far as you can recall them): How many Tapes were made? Was it properly released, like with a release-show and stuff? Are these the only "Never Again" songs?
How many shows have you played under that name? Was there ever any Never Again merch?

Sorry I have no idea how many we made. I guess around 150-200. We just sold them on shows.
There was no release show or anything like that. Yea we had some more, but never released them.
At least not in those versions.

Was Never Again a "vegan straight edge band"? Why has it changed?

We were never a "Vegan Band" we had vegans and vegetarians. But didn't call ourselfs vegan band. As far as I remember our bass player at that time was not vegetarian ... but I'm not sure.

What was the main reason for the name-change (to caliban)
and what happened to the 2nd singer? What else has changed since "caliban"?

I never had any contact since to this second singer. So no idea.
What changed? We learned how to use our instruments better I would say hahaha
I'm pretty sure our first shows sucked pretty much. But people enjoyed it anyways
because it was already pretty heavy :-P

So, yeah, I guess anything else just fell into obilivion...
but at least now you can finally listen the shit out of it!

For anything else Caliban related, check my old blogspot post on here. You're welcome.
Eingestellt von xRULEx um 11:47